How to "unpivot" a table in BigQuery

June 17, 2018
Recently, I was presented with a problem in BigQuery: How do I make a table's metrics be returned as rows? Normally, metrics are presented as columns and dimensions as rows. But in this case, I needed the metrics to appear as rows too.

In short, I needed to "unpivot" a table like this:


How to get unpivoted results in BigQuery

Let's say I have data like this in a table called "Campaign_Results":


But the results need to be returned such that the "Impressions", "Clicks" and "Conversions" are in their own rows.


Organise metrics into a STRUCT

The BigQuery documentation doesn't really give a good explanation of what a STRUCT type is. But I've found that it is really a key-value object. If you're a programmer, then you would be familiar with such data types (called "object" in JavaScript, "dict" in Python, "hash" in Ruby, etc.)

Each metric is organised into one STRUCT that has one key, "Metric", and one value, "Data". So in my sample data where I have three Metrics:
Then for each row in my data, I have one STRUCT per metric like so:
This "unwraps" each metric into a pair of Metrics and Data like this:


Put all STRUCTs into an ARRAY

My next step is to re-arrange the metrics STRUCTs so that they are not "side-by-side", but "up-and-down". An ARRAY helps me do this. Just as with most regular programming languages, an array is a list of values. Unlike those arrays, BigQuery requires all of the values in an ARRAY to be of the same type. The BigQuery documentation describes more limitations of ARRAYs.

So for each row of my data, instead of having three separate STRUCTs, I have one ARRAY containing three STRUCTs like this:

I have also named my ARRAY as "Metrics_Data". This will be used in the next, final step.

The ARRAY arranges my metrics in a "vertical" manner now:


Flatten the ARRAY with a CROSS JOIN and UNNEST

The first two steps organise my data into a "Campaign_Results_Metrics_Data" temporary table that is almost ready to be used.

The final step is to get the dimensions returned with every "row" of data. … Well, that's what non-BigQuery practitioners would say. In BigQuery terms, I want to "flatten" the data.

The BigQuery documentation describes how to perform this flattening, mentioned in the instructions for querying STRUCTs in an ARRAY. It involves a CROSS JOIN with BigQuery's own UNNEST operator.

So in my final SELECT statement, I CROSS JOIN my "Campaign_Results_Metrics_Data" temporary table with its "Metrics_Data" column (the ARRAY of STRUCTs):

That gets my data into the final form that satisfies my requirement:


This form should be sufficient to be used with programming code (e.g. Python, Google Apps Script) and visualisation programs (e.g. Tableau, Data Studio). The latter should also be able to handle aggregation (e.g. sums, counts, averages, etc.) of the unpivoted metrics without further scripting.

Popular posts from this blog 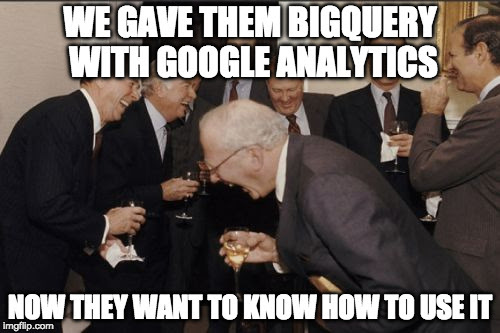 If you're using Google Analytics 360, the premium version of Google Analytics, then chances are you have setup an automatic export of your Google Analytics data into BigQuery. This allows your hit-level data in Google Analytics to be exported to BigQuery datasets every day. But Google does not provide much help with figuring out how to query your data! Google Analytics provides a cookbook of sample BigQuery queries . But these are very limited in scope. And they omit the most trivial -- yet important -- query that you will ever run: Get a flat table of results that you can export into a CSV file or a SQL database Flat tables are essential to perform further work on the results with Python, R and other data science languages. Another flaw in the cookbook is that it uses BigQuery's older Legacy SQL. BigQuery is already moving to its Standard SQL. But examples based on Google Analytics data were either difficult to find or based on guesswork that had not been tested
Read more 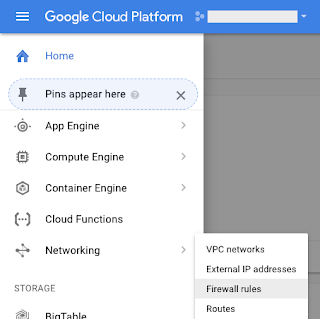